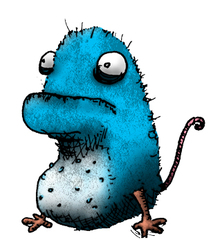 Blue Guy and Fly is a script I wrote about a year ago. It’s the adventures of two close friends: Fly who, oddly, is a fly. And Blue Guy (called “Blue” for short) who is a character with no arms, but an awesome tail. He, oddly, is blue. And furry. Not at all like Cookie Monster. Think surfers in the city. Who get around on a skateboard. (See the latest version of the cartoon.)

It was always my intent for this to be a cartoon. I tried to write it as a “regular” story that I would publish like all my other books. Couldn’t do it. I kept seeing (and hearing) them as cartoon characters in a YouTube video.

The artist who illustrated the story was also going to animate it. I got as far as the VO (voiceover), but the artist, Jean Paul Iragorri, took on a new job and just didn’t have the time.

Finally, I hired an animator on oDesk.com. As always, I’m on a tight budget. The animator, Kathputlee Arts & Films, is working with a limited number of illustrations. Above are the initial test animations for the characters. I’ve asked for more movement of the arms of all the characters, including the people walking on the street. But, again, tight budget. So, we’re not talking Pixar here.

The process will take a few months. Ultimately, we will have three 2-3 minute videos. (The script is in three acts.)

Would love to hear your comments. I’ll be posting more “glimpses” of the project as we go along.