Should You Take the Hispanic Market Seriously?

Some Indie Authors are Starting to Cater to Hispanic Consumers

More indie authors are offering their children’s books in both English and Spanish. But is the demand for Spanish-language books as big as indie authors hope?
From a financial perspective it makes sense. According to a 2012 Nielsen report, State of the Hispanic Consumer: The Hispanic Market Imperative, “The U.S. Hispanic population is the largest minority segment and is growing at a dramatic rate… [the] future U.S. economy will depend on Hispanics by virtue of demographic change and the social and cultural shifts expected to accompany their continued growth.”

“Although bilingual, they first wrote their children’s books in English.”

Mary Esparza-Vela and her husband, A.M. Vela, are indie authors betting on the Hispanic market. Although bilingual, they first wrote their children’s books in English. Then, they decided to offer their stories in Spanish. Mary says, “I learned to read and write in Spanish and English at a young age and credit my maternal grandfather (Abuelito) for my love of reading and writing.” She describes her grandfather sharing hours of stories with his grandchildren. “I can still picture the funny faces and hand movements he made as he acted out the stories. We laughed until we could laugh no more.”

Most contests are for English-only books. One exception is The Gittle List contest for self-published authors of children’s picture books. Each year ten books by indie authors are selected to be promoted during the holiday season. Aviva Gittle, owner of Aviva Gittle Publishing and host of the contest says, “Although I only allow English-language books in my contest, if a winner has their book available in Spanish, both books are included in most marketing.”

It is not unusual for native Spanish speakers to first write and publish their stories in English. Mariana Llanos, who emigrated from Peru, published her first book, Tristan Wolf, in English. Now all her books are available in English and Spanish. Mariana is a two-time winner of The Gittle List contest. Her English-language books, Tristan Wolf and The Wanting Monster each earned a Top 10 spot among the 2013 and 2014 contest entrants. (Spanish titles are Tristán Lobo and El Monstruo Quierelotodo, respectively.)

The Velas were invited by Aviva Gittle to enter the contest. They submitted The Lost Tooth, a story about a baby hippo who loses his tooth and enlists the help of other animals to try and find it. (The Spanish version of the book is El Diente Perdido.)

“My grandchildren are being raised bilingual, so it was important to me to offer my stories in both languages.”

Aviva Gittle also publishes many of her own books in both English and Spanish. “My grandchildren are being raised bilingual, so it was important to me to offer my stories in both languages.” Unfortunately, Aviva speaks very little Spanish, so marketing the books is challenging. “Hablo muy poco español,” she says. “Spanish-speaking authors definitely have an advantage. But, English-only writers can employ professional translators and bilingual editors for great results.”

The Nielsen report advises, “[It] is instructive to recognize that unique and useful vehicles for reaching Hispanics exist around language, media consumption, and technology adoption. Given the total market’s dependence on Hispanics for future growth, tapping Hispanic preferences and purchasing behaviors is essential for any strategy or marketing plan to be successful.”

“Be proud of your language and your culture.”

Although increasing their sales is important, the Velas started offering Spanish-language versions of their stories for a more important reason. The wise words of Mary’s Abuelito: “Be proud of your background and your culture. Don’t forget your native language. Two languages are better than one.”

Note: All of the books mentioned in this article can be found by searching Amazon.com for the author’s name (Mary Esparza-Vela, Mariana Llanos, and Aviva Gittle.)

The Gittle List contest is open to indie authors from around the world. To learn more about the contest, see previous years’ winners, and see the submission guidelines, visit https://gotogittle.com/ and select Contests from the top menu. Deadline is November 15, 2015. 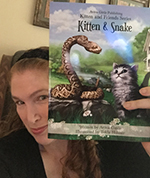