Harris Tobias, author of The King’s Dream: A Fairy Tale, #3 on The Gittle

List 2014, has provided two of his short stories exclusively to Aviva to publish on the Gittle website. Just in time for Chanukah! (Which starts at sundown today, December 16, 2014.)

It was the coldest Chanukah anyone could remember. Icicles hung from the eaves and a cold wind blew the snow into drifts on the lawn. It was the last night of Chanukah and the fully lit menorah would do what it could to compete with the multi-colored twinkling displays of Christmas lights on all the other houses in Stoney Glen Estates.

As the subdivision’s only Jewish family, little Sarah Greenstein took special pride showing the menorah in the living-room window. The menorah was a heavy silver antique passed down, like her Jewishness, from her Mother. Unfortunately, it required a rather large odd sized candle which the Greenstein had to special order many weeks in advance from a Judiaca store in Brooklyn. The candles were kept in the drawer with the tablecloths until they were needed. 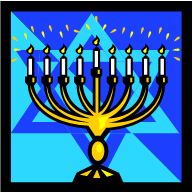 This is how Chanukah had been for all of Sarah’s nine years. But this year something had gone wrong with the candle order. The count was wrong and the box from Brooklyn was short the nine candles needed for the last night. Instead of containing 44 candles, which covered all the nights of Chanukah, the candle box was completely empty after the seventh night. Not only were there no special candles left, there were no candles in the house at all and the storm outside made driving to the store impossible.

The mood inside the Greenstein’s house was as dark as the menorah. All around them the neighbor’s houses twinkled and flashed with Christmas color. Some houses had illuminated Santas and sleighs on their roof or lawn, some had reindeer and wise men, and one had a huge inflated snowman. Everywhere there were lights; cascades of lights hung off the roofs and engulfed every shrub and tree. The menorah’s slow build up to its fully lit splendor was all but lost in the Christmas glare.

Alas, it appeared that there was nothing  to be done to salvage the situation.  The festival of lights was headed for a cold and dark conclusion. Sarah sat in her room disappointed and stared out her window. The neighbor’s colored light show reflected off the icicles hanging from the eaves giving them the appearance of colored rods. Maybe it was that colored glow that gave Sarah the idea that saved this story and her final night. Running down the steps she ran to her father and told him her idea.

“Put icicles in the menorah?” her incredulous father asked. “I don’t think that’s a very good idea. They’ll only melt and make a mess.”

But Sarah begged and pleaded until her father put on his winter coat and went to fetch the ladder from the garage. In a few minutes he returned with a pail containing nine icicles just about the size of the menorah’s candles. Sarah set them in their sockets ready for lighting.

It looked a little strange but there was no denying it had a certain charm about it. The family gathered around the curious candelabra, joined hands and said the Chanukah prayer. Father even went as far as to light a match and touch it to the shamus, the center candle that lights the others.

No one was more surprised than the Greensteins when the icy shamus held the flame just like a real candle. In a few moments all the ice candles were lit and the menorah burned in full glory. Not only did the menorah burn all night long but, if that weren’t miracle enough, the storm knocked out all the power in Stoney Glen Estates plunging it into darkness.

The Greenstein’s menorah was the only light anyone could see  for miles around.

The latkes lay forgotten. Schmulke Bara left them in the barn for the homeless man and just assumed they were eaten. They lay moldering in the rich barnyard stew of animal stink, hay and fecal matter. It was amazing the goats hadn’t found them or the chickens. 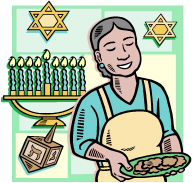 Thick with oil and rich in flavor Schmulke’s latkes were not to be taken lightly. In fact there was nothing light about them. Her family often teased her about how oily they were. “If we ever run out of candles,” her husband would say, “we can always light one of your latkes, Schmulke.”

It was Spring when Schmulke saw the pancakes again. By that time they had grown a curious covering of mold. No one ever saw a mold like that. It was a fluorescent yellow and glowed in the dark. She thought briefly of taking it to the rabbi to see if it was an evil spirit but in the end she just threw them away. Disgusted, she threw the ugly mess into the compost pile where the rare mold had a chance to mingle with the natural ferment of kitchen scraps and soiled hay.

Fast forward a few weeks and the compost pile underwent a bizarre transformation. First a slight pulsing and then a strong regular heaving and finally it was a living breathing gelatinous mass or organic debris that swallowed wayward mice, gobbled up newly hatched chickens and supped on an occasional gosling.

Finally, it rose up on rubbery legs and staggered through the barnyard frightening the live stock it made its blind way to Schmulke’s door. There it waited until Schmulke opened the door and found it.

“And just what might you be?” she asked the thing.

In a throat never meant for speaking, the thing scratched out a single word, “Latkes,” was all it said.

Harris Tobias was raised by robots disguised as New Yorkers. Despite an awkward childhood he learned to read and write. To date Mr. Tobias has published two detective novels, The Greer Agency and A Felony of Birds, to critical acclaim. In addition he has published dozens of short stories. He is the author of many children’s books including At The Robot Zoo, MoonRivet Saves His Skin and An Alphabet Book of Bugs available on Nook & Kindle. You can find a list of all his books here.